The Milwaukee fish fry is a well-established tradition. Originally based in the city’s immigrant Catholic population, the Friday fish fry quickly became a city favorite. Some restaurants serve a fish fry every night of the week, while others reserve their fish fries for Fridays only. While numerous restaurants in the area serve a fish fry, some are definitely better than others. The best fish fries offer a choice of several types of fresh fish prepared in a variety of ways, and served alongside delicious yet traditional sides. Easiest test for a great fish fry? You’ll find the place packed on a Friday night with regulars and first-timers alike lining up to grab some delicious fried fish. Read below for a quick guide to the area’s best fish fries. 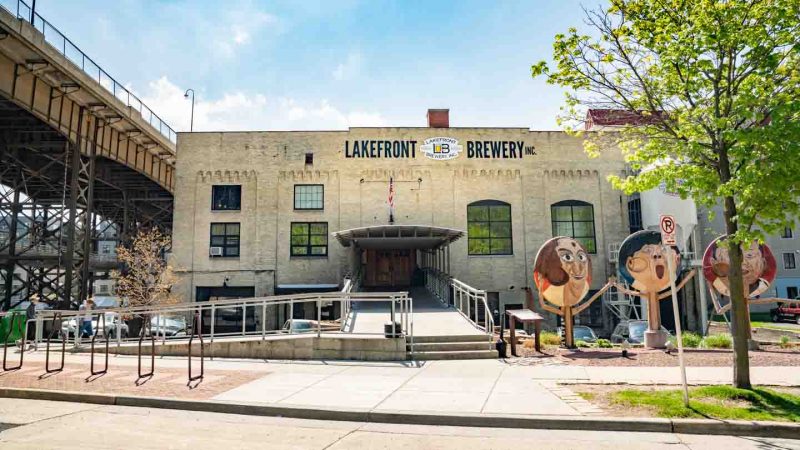 In one destination you can hit two of Milwaukee’s best traditions: the Friday fish fry and brewing beer. Besides for making excellent beer and offering a really fun brewery tour, Lakefront Brewery also has a large beer hall where they serve up some tasty food. On Fridays, the beer hall hosts one of the most popular fish fries in the city. The seating is family style and you can expect to hear some live polka music from the Brewhaus Polka Kings. Choose from the beer-battered cod ($13), fried perch, shrimp, or smelt, or get the combo platter which comes with cod, perch and shrimp ($16). All dinners come with coleslaw, tartar sauce, and a choice of sides, including fries, sauerkraut, red cabbage, potato pancakes, or mac n’ cheese. For a truly unique experience, reserve a brewery tour and your seats for a Friday fish fry at Lakefront Brewery – seats fill up quickly so be sure to call ahead.

The Packing House is an excellent supper club style restaurant on Milwaukee’s south side. Diners stop by for live music, excellent cuts of steak, and all sorts of tasty dishes presented in a somewhat fancy yet also comfortable setting. The restaurant also hosts a Friday fish fry that a few regional publications have rated as the best in the city. Dinners include hand breaded fresh cod, a cup of clam chowder, marble rye, and choice of either French fries or potato pancakes. Price for adults is $14.95, for children under ten $8.95, and early diners (before 6 pm), get a discounted rate of $13.95. For a casual Friday fish fry in a fancier setting, stop on over to The Packing House.

Jack Pandl’s in Whitefish Bay, just outside of Milwaukee, has been offering diners perfectly made German dishes since 1915. The fish fry, which is only served on Fridays, truly stands out for its top-notch quality. Options include potato crusted, deep fried or broiled cod, fried lake perch, and fried or broiled whitefish ($16.95). Fish fry dinners come with a choice of soup or salad, cole slaw, and a choice of potato, including potato pancakes, baked potato, french fries, or the vegetable of the day. Stop by Jack Pandl’s Whitefish Bay Inn on a Friday for some amazing fish fry, or any other night of the week for some classically prepared German cuisine.

Since 1942, Pitch’s Lounge and Restaurant has been the east side’s favorite supper club. The restaurant specializes in all sorts of supper club fare, including steaks and the restaurant’s specialty, baked ribs. Pitch’s also features a cozy bar that’s perfect for grabbing a drink before dinner. On Fridays Pitch’s transitions into a popular destination for fish fry. The pan fried lake perch in white wine and lemon is especially good ($16.95), as is the beer battered cod and the sicilian-style cod, which comes breaded in Sicilian breadcrumbs ($13.95). Another specialty is the baked cod oscar, which comes topped with crab meat, asparagus, and hollandaise sauce ($15.95). If looking for surf and turf, you can also get rib and fish platters. Check out Pitch’s for a fantastic fish fry on the east side.

Located just west of downtown in West Allis, Kegel’s Inn has been serving up traditional German fare since 1924. The restaurant is consistently rated as one of the city’s top destinations for their Friday fish fry. All fish fries are served with a choice of potato, cole slaw, and rye bread, and you can pick from a number of fish options. The fried cod comes as with four or six pieces ($12.50/$14/50), or diners can pick the lightly fried lake perch ($16.50), the bluegill ($15.30), or the walleye ($14.50). The menu at Kegel’s Inn features a range of fantastic German staples as well, so best to save room for an appetizer or entree for the table Try one of the best fish fries in the city by heading over to Kegel’s Inn in West Allis.

Final Approach is a casual restaurant near the airport on Milwaukee’s south side that serves up some excellent food. With numerous nightly specials, you can always guarantee top-notch foods and drinks at a reasonable price. Final Approach features a nightly fish fry, along with a truly unique drive-through fish fry every Friday from 3pm until 9pm. The fish is excellent, and diners get a choice of breaded perch, baked or battered cod, and breaded or broiled walleye, along with numerous fish sandwiches and other seafood specials like salmon piccata ($17.95). The fish fry comes with fries, cole slaw, tartar sauce, and rye bread ($11.95), or you can have all you can eat beer battered cod with the same sides ($15.95).

Three Lion’s Pub is a trendy yet traditional British-style pub located in Shorewood. They serve up all sorts of pub classics, like scotch eggs ($6), giant pretzels with dipping sauce, bangers and mash with horseradish mashed potatoes ($13.99), and even the British favorite, chicken curry over chips ($14.99). As expected with just about any British pub, the restaurant offers a daily fish n’ chips, which comes with deep fried cod over perfectly crunchy fries, mushy peas, and tartar sauce ($14.99). If in the mood for a fish fry when it’s not Friday, head on over to the best British pub in the city for some traditional fish n’ chips.

Victors on Van Buren, located on the edge of downtown Milwaukee, is a fantastic supper club for dinner, and if you stick around, transitions into a fun night club in the late evening hours. Like most supper clubs, you can start with a shrimp cocktail ($16.50), or try one of the delicious steaks, like the 12oz. filet mignon ($35.50). On Fridays, Victors offers an all you can eat beer battered or baked cod dinner, which comes with a choice of fries, cheesy hash, or loaded baked potato, along with some coleslaw, bread, and tartar sauce ($13.75). Alternatively, diners can choose lake perch for their Friday fish fry ($14.75). The restaurant also features a pretty fantastic Friday special that comes with a 7oz. tenderloin, two fried shrimp with mushrooms, onion rings, and cocktail sauce ($23). For one of the best all you can eat fish fries, head on over to Victors on Van Buren.